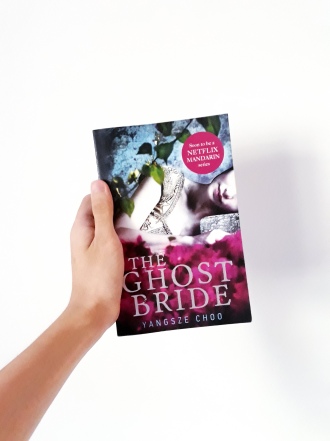 Though ruled by British overlords, the Chinese of colonial Malaya still cling to ancient customs. And in the sleepy port town of Malacca, ghosts and superstitions abound.

Li Lan, the daughter of a genteel but bankrupt family, has few prospects. But fate intervenes when she receives an unusual proposal from the wealthy and powerful Lim family. They want her to become a ghost bride for the family’s only son, who recently died under mysterious circumstances. Rarely practised, a traditional ghost marriage is used to placate a restless spirit. Such a union would guarantee Li Lan a home for the rest of her days but at a terrible price.

After an ominous visit to the opulent Lim mansion, Li Lan finds herself haunted not only by her ghostly would-be suitor but also by her desire for the Lim’s handsome new heir, Tian Bai. Night after night, she is drawn into the shadowy parallel world of the Chinese afterlife, with its ghost cities, paper funeral offerings, vengeful spirits and monstrous bureaucracy—including the mysterious Er Lang, a charming but unpredictable guardian spirit. Li Lan must uncover the Lim family’s darkest secrets—and the truth about her own family—before she is trapped in this ghostly world forever.

I was extremely disappointed when I finished reading The Ghost Bride as I was expecting to love it. There are a couple of elements in the book that I enjoyed but they are thwarted by the sheer amount of distasteful elements that I could not bring myself to ignore while I was reading the book and thus, greatly affected my enjoyment for the novel.

“I wondered whether he had merely been polite to me because custom demanded it. But his eyes had lingered too long. Remembering his steady gaze, I felt weak. Was this love? It was like a consuming flame, licking through my defences at a slow burn.”

I thought the romance for this novel was very insta-lovey. Take the above quote as an example. Li Lan, who is the protagonist of the novel, just met Tian Bai at the Lim family estate and she has already fallen for him. You would think that the romance would progressively get better as the book trudges forward, but no, it progressively gets worse. I dreaded reading every scene that both of them are in because their love does not exist and if you insist that it does, then it is as stale as a piece of rancid bread. Li Lan swoons whenever she is near Tian Bai and she barely even knows him. He could be a kidnapper or an en masse murderer and I bet Li Lan will still be languishing over him and not see the facet he is wearing. Towards the end of the novel, there is a scene where Li Lan cheated on Tian Bai by kissing another guy and I was not especially fond of that but she did bear the responsibility and do the right thing in the last few pages of the novel. Here is another quote showing how she swoons over Tian Bai because I want all of you to experience what I underwent:

“I nodded but hardly heard a word that he said. I could only recall the slight pressure of Tian Bai’s finger as it had traced the curve of my cheek.”

The pacing of the novel is all over the place. I do not mind if a book starts off slowly or it picks up speed towards the middle of the book and slows down towards the end or it is slow all the way towards the end as long as it remains consistent. However, that is not the case here. I thought the pacing of this novel started off really well. It is steady and unmistakably pleasant to read. As the book progresses, the pacing starts to undergo a series of chaotic phenomenon like a delicate thread of line being severed from the grand scheme of things. Sometimes it is fast and oftentimes, it is a mix of both fast and slow which showcase how inconsistent the pacing really is. Thus, I can safely state that the pacing is one of the weak points of the novel.

Before I read this novel, I thought this was going to be a mystery book incorporated with supernatural elements but my ideas were quickly put into liquidation when I realized the mystery element is merely just the subplot of the novel. Still, I decided to continue on with whatever the author has to offer for the subplot of this novel and I was left dissatisfied. I thought it was easy to decipher who Tian Ching’s murderer is and although I was satisfied with the explanation given by Tian Ching’s murderer on murdering him, I thought it was funny how easy the murderer gives in and offers up an explanation of her wrongdoing… Like girl, aren’t you supposed to deny, deny and deny that you did what you did? Bruh, I cannot believe she just gives up and tells Li Lan who is not at all threatening.

“They had all my favourite kinds of kuih – the soft steamed nyonya cakes made of glutinous rice flour stuffed with palm sugar or shredded coconut. There were delicate rolled biscuits called love letters and pineapple tarts passed out of the rich pastry. Bowls of toasted watermelon seeds were passed around, along with fanned slices of mango and papaya.”

Sure enough, the writing style for this novel is descriptive, crisp and poetic. The author is unquestionably skilled in writing and the quote above is evidence that she could write beautifully. The descriptions of food definitely got me salivating and her descriptions on the landmarks in Malacca allows me to visualize the precinct clearly. Here is another quote that showcases the author’s brilliant writing style:

“In accordance with Islams, the upper-class Malays kept their ladies in purdah and no men other than immediate family members were allowed to glimpse them unveiled. The local Chinese did not observe such strict segregation of the sexes, though too much intimacy between two young people was discouraged.”

You can tell the author did a lot of research on ghost marriages, Chinese notions of the afterlife, Malaya, Straits-born Chinese, Chinese dialects, Chinese names and Malay spellings as they are all written in the author’s note at the end of the novel which, I thought, was a great addition of the book.

The atmosphere for this novel is crafted immensely well and I can feel the fear radiating off Li Lan’s back most of the time. Other times, she annoyed the heck out of me but we will talk more about that later on. I thought the atmosphere was at its peak when it reaches Chapter 32. That is where Li Lan’s body is being possessed by another soul and Li Lan has to look at what the other soul is doing to her body and her life through the other dimension which I thought was rather ominous.

“His corpulence only served to accentuate his resemblance to a pig, especially when he sank his jowly chin his neck to regard me.”

Li Lan is the most judgemental and annoying character in the novel and we are stuck in her head throughout the book. Take the quote above as an example. She incessantly asks her other ghost companion questions and demands for her other ghost companion to take her to places and when her companion asks her questions, Li Lan ‘wishes she would stop asking her questions’. Yes, that is the exact quote from the book. It is rather funny she thought of that because I thought of that as well but in my case, I actually wanted Li Lan to shut the hell up instead of the ghost companion. Also, there is not any character development for Li Lan throughout the novel, she remains exactly the same as she is from the start to the end.

Tian Ching does not serve much in this novel although this whole dilemma originates from him. He is that spoilt brat who is lazy and enjoys fomenting problems. Yes, that’s all for his character traits. Tian Bai has no personality. Yan Hong is fine but I wish there’s more depth to her character.

Er Lang is hands down the best character in this novel. He is snarky, funny and likes to banter back and forth with Li Lan. One of the best things he has ever said to Li Lan is this: ‘Stop asking foolish questions and go!’ and I will give an extra quote because I like this quote too: “He cocked his head to one side. ‘If you want to follow someone, you ought not to do so at such a pantingly close range.'”

In conclusion, my final verdict for this book is 35% (E). I really thought I would like this book but unfortunately, it did not work for me. However, I am willing to give the author another try. The Night Tiger which is the author’s second novel sounds like a book I would really appreciate and I would fancy giving that a try in the future.

This is the end of my review for The Ghost Bride By Yangsze Choo! I hope you all enjoyed it and follow me with your email/Wordpress account to get notifications when I post a new article! Bye!