Hey Guys! I will be composing an unconventional type of article today because not only will this article be comprised of a book review for Ascension, it will also be my very first online blog tour for a novel. I would love to take this segment of the article to thank both the author and @definitelybooks for dispatching this novel to me and supplying me with this wondrous opportunity to join the blog tour for Ascension.

Before we dive right into the review section, I would like to showcase the other bloggers and bookstagrammers that had hemmed in on this blog tour: 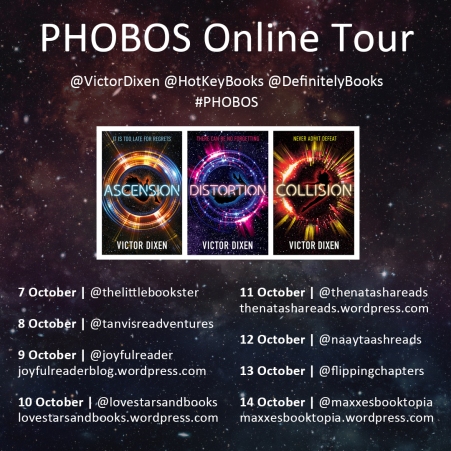 So, without further ado, let us plunge right into the review!

Six girls, six boys. Each in the two separate bays of a single spaceship. They have six minutes each week to seduce and to make their choices, under the unblinking eye of the on-board cameras. They are the contenders in the Genesis programme, the world’s craziest speed-dating show ever, aimed at creating the first human colony on Mars.

Throughout this review, you will discover how this novel went from 2 stars to 4 stars for me. Oh ew, the above sentence reads like a textbook but you get the gist. So, let me tell you a story of how it arose. Let’s start off with the commencement of the novel.

The beginning of Ascension starts off with this little template of the Genesis Program which I originally thought was a program to create ‘artificial’ babies because the symbol of the company contains a baby sucking its thumb and I realized I was a dumb hoe because it doesn’t match up to what I was pondering as I continued reading the mini template. Instead, the Genesis Program is about this company christened Atlas Capital, buying over NASA due to the heavily indebted US government and taking over the colonization of Mars project to send 6 girls and 6 boys to space and conduct this speed-dating session between these teenagers and make a documentary out of it to earn these contemptible coins.

That template had gotten me invested in the story and the ‘want’ to know what in the living world was going to happen to these 12 teenagers was humongous so I proceeded to read the next page and those were some intense scenes because the protagonist – Leonor was being introduced to us through reporters shoving their microphones and cameras in her face and the fact that she was being rude to them by flicking a middle finger made me think that she was a spoilt child but we quickly learned that the 12 contestants weren’t supposed to say anything to those feeble-minded reporters because they were too good for them. Just kidding, they weren’t supposed to say anything because they were apprised not to do so. But still, that middle finger though.

So, fast forward a few chapters and we are in space. What I truly enjoyed about these chapters were the templates and descriptions of the spaceship and its inner workings. It was honestly the most surprising and original thing I have seen in novels for years. I enjoyed the science behind the mechanics and the physics that the characters spluttered. The second thing that I enjoyed was the characters. The interactions between them, the banter, the quarrels and the drama. Like dude, I was invested in the story the whole way through because those drama, banter and quarrels were some smoking hot tea. The relationships, not the sexual relationship (bruh, that’s not the default) but the friendship version, were so good. The dynamics between the characters and even though the drama unfolded, they were still friends the whole way through.

After we lingered in space with the characters for a few chapters, we returned to Earth with a brand new perspective that I absolutely despised. The brand-new protagonist christened Andrew, the son of a recently deceased employee working for Atlas Capital, was being a whiny-ass bitch. Reading his perspective was a pain in the head because he kept whining about how he wasn’t selected for the Genesis Program and how his father did not even clear up the air about why he wasn’t selected. The fact that he kept calling the contestants ‘nobodies’ and commenting on their incompetence as if he was the best just fueled my anger towards this spoilt child. This was my actual reaction reading his perspective in the novel: “Bitch, shut up. Better luck next time hoe.” However, what surprised me was that I grew to approve of him as a character in the novel. His character development towards the end of the novel was amazing and I found myself rooting for his ass but he still isn’t one of my favourite characters so, that’s that.

Let’s go back to space. So, these characters proceeded to perform what was required of them – Speed-Dating. I swear, the speed-dating aspect was a great addition to the novel but the pickup lines that the male characters used were such a cringe-fest that I had to submerge myself in cold water to soothe the goosebumps that ran along the clefts of my skin. The female characters seduction tactics were as defective as the males. However, I found myself rooting for some of the relationships such as Leonar and Marcus & Kris and Alexei. Oh, I have to talk about this: Fangfang’s very first-speed dating session with Tao was so repugnant because she was already talking about making babies with him. Talk about awkwardness. Bitch hadn’t even started and she already lost her man. Anyways, I am going to include a pickup line that I cringed-read:

“Three, you say you lacking in self-confidence, I say modest. A virtue that seems cruelly absent from certain girls who are travelling on the Cupido.”

In the notes that I had written when I was reading this novel, I wrote Leonar’s character plummeted 90 degrees downwards because of that “not like other girls” sentence and my opinion still stands. As soon as those words were uttered in her head, the fiery passion that I had for her, in the beginning, was blanketed over by a wave of cold water. I was like: “Girl, calm down. Stop assuming and quit being a narcissist.” However, along with those sentences, I found myself agreeing to her notion. Take a look at the sentences:

“I’ve never been a huge fan of flowers, not like most girls are. Flowers are too fragile for my taste. They fade and then thy spoil, they’re transient like a promise that isn’t kept. Now, Marcus’s roses, I reckon I could forget them easily enough.”

Leonar, darling, I totally agree with you except for that “most girls” segment. Quit making postulates okay? You do not want to become Tris Prior in Allegiant. At least, I hope you will not escalate to that point in later books.

Another thing that I unconditionally adored about this novel was the readability and the pacing. I found myself compulsively reading this novel due to how easy it was to get into this novel and thus, contributed to the pacing of the novel. The pacing was pretty consistent throughout the novel EXCEPT for the speed-dating scenes and Andrew’s scenes. I thought those scenes were drawn out and I thought it could be moderated to drape in with the rest of the story. Otherwise, everything would be perfect.

I did not particularly enjoy the writing style of this novel. Although it had that readability and that thriller-like pacing, I thought the sentence structure and the paraphrasing were out of place in some precinct and consistent in others. Often times, the characters in the novel had spoken like children and I thought that division of the writing was the one that I least enjoyed.

Moreover, a side-character on earth was introduced and I literally do not know why she was being presented to us. The fact that I can’t even remember her name tells a lot. Her perspective does nothing to advance the plot and her actions were not as important as Andrew’s. Honestly, she does not need to be introduced and if you cut those segments out of the novel, you will still get the same story with similar intrigue. Thus, I did not like this characterization that was placed without any intentions in the novel.

In conclusion, I am giving this novel a 70% (B). It was a solid read and I enjoyed it tremendously. 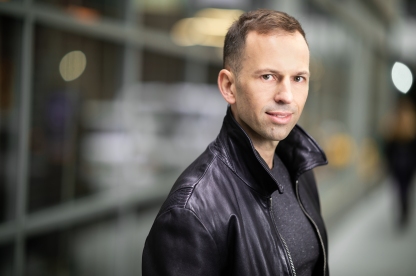 My father is Danish and my mother is French. When I was a kid, I travelled throughout Europe with them, it was fantastic. Now an adult, I still have a taste for travels and stories. I once lived in Denver, Colorado, at the edge of the Rocky Mountains. Later I moved to Dublin, Ireland, and then to Singapore. Today, I live in New York City with my family and my two inquisitive cats.

Oh yes, I almost forgot to tell you: I am a very light sleeper, and have always been. No treatment was ever able to cure my insomnia, but I think that’s for the best. With time, my sleepless nights have become very good friends. I even dare say that they are my muses!

You can find all my books on the shelves of this cabinet of curiosities. My first four books belong to The Strange Case of Jack Spark series, which won the most prestigious science fiction and fantasy award in France, the Grand Prix de l’Imaginaire, in 2010.

In the Animale series, I tried to reveal the untold stories hiding behind some of the most well-known yet mysterious fairy tales: Goldilocks and The Snow Queen… The first book won the Grand Prix de l’Imaginaire in 2014.

In my most recent series – Phobos – I look towards the night sky filled with stars, and towards our future as a species forever attracted to other worlds – but at what price?

As for the books to come… I have many ideas, and the sun is not out yet!

This is the end of my spoiler-free review + Blog tour article for Ascension By Victor Dixen! I hope you all enjoyed it and follow me with your email/Wordpress account to get notifications when I post a new article! Bye!