Hey Guys! It is Max here and we will be composing a review for a novel called ‘The Good Thieves’ By Katherine Rundell today. I don’t know if you remember this but I read a book christened ‘The Wolf Wilder’ By Katherine Rundell in the month of March and I elucidated on the likes and dislikes that I had for that novel in this March Reading Wrap Up post and it ultimately boiled down to a mediocre rating. However, despite my distaste for that novel, I requested this novel from Pansing to give the author another chance and thank goodness I did because I enjoyed it so much more than her other work.

Before we plummet right into the review section, I would like to thank Pansing for sending this novel to me.

So, without further ado, let us dive right in! 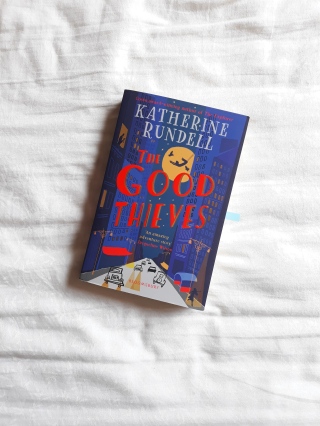 When the letters first arrived from her beloved grandfather—the shaking, green-inked letters, full of bewildered anger at the loss of his ancestral home and the priceless jewels within it—Vita and her mother took the next boat to New York. And now that she’s here, Vita has only one goal: To break into Hudson Hall and steal back what the sinister Basil Sowotore took from her family.

But to do so, she needs a plan, a weapon, and faith in the pickpockets, trapeze-artists, and animal-tamers she has met along the way. With her troupe behind her, Vita attempts the most daring heist the city has ever seen. But will she succeed?

“The night city was swept by a premature winter. An ice snap froze the water in the pipes. Sleet washed down the city, swept the detritus of the mud and the old newspaper and the furious cats out from the murky alleyways into the main roads.”

First of all, I thought the writing style for both ‘The Wolf Wilder’ and ‘The Good Thieves’ were beautifully crafted. It seemed effortless for the author to string sentences together as the whole novel is filled with seamless prose and if you are looking for an example, try reading the quote that I had placed above of this sentence. I have loved the style of her writing and the technique she used to string sentences and words together ever since I read ‘The Wolf Wilder’. The author does not concoct extra information just to prolong the novel or string more sentences together to hit a goal or something, she gives the information so impeccably that everything seems necessary. In addition, I thought the descriptions that she had given in the novel were perfectly measured as it felt so real in my brain that I could touch it, virtually. Speaking of descriptions and feeling it virtually, this brings us to the next point: The Atmosphere.

The atmosphere of this novel is a mixture of comedic relief, hatred and anger. It is facetious because of the constant banter between the characters and the arguments seem to never end which I, at times, found myself laughing at the exchange of words between them. Hatred and anger come into play due to certain characters doing nasty businesses and I thought the author did a good job at extracting our emotions out from our body and let it diffuse into the atmosphere. Thus, I admired the crafting of the atmosphere made by the author.

The pacing of the novel is uprightly one of the most astounding items that is being placed in the book as it moves in a rapid manner and this is due to how addictive the plot is in which I will talk more about later on. The plot has an addictive quality to it and this gives the book an advantage as readers will carry on with the novel without ceasing as they would like to find out more about what is going to happen to the characters. To compare it with ‘The Wolf Wilder’, I thought ‘The Good Thieves’ was traversed better than it because I can sense vacillation at certain localities in ‘The Wolf Wilder’ that took me out of the context of the story and the ending for it was hastened like it was elbowing me laboriously out of the house or in this case, the book. Therefore, ‘The Good Thieves’ granted me a better impression than ‘The Wolf Wilder’ will ever remit.

In order to properly review the characters, I am going to split the protagonist and the side characters into sections to enunciate my feelings on each one of them. Please take note that I will not analyse the antagonists of the novel as I do not want to pillage the plot of the book to you. Thus, we shall begin:-

1) Vita: I do not actually know how to review our protagonist without sounding like a broken record. Well, here goes nothing. She is smart and skilled in throwing weaponry with perfect precision. I enjoyed reading about her scheme to take her grandfather’s castle back from the antagonist and her marvellous plots and plans.

2) Arkady & Samuel: Their characters are not well-developed but I enjoyed the constant banter that Arkady gives to his other teammates and friends. Both Arkady & Samuel have a beautiful friendship and both of them aspire to be something else and they chase after their dream and that is a very heart-warming thing to read about.

3) Silk: I enjoyed the glimpse-through backstory that the author has bestowed upon her but her character is, again, not well-developed and therefore, I cannot really comment on her characterisation. If I were to rectify a part of this book, I will definitely give a thorough background story for Arkady, Samuel and Silk characterisation because I thought it was extremely important to give backbones to your characters.

However, there were plot holes and specific precincts in the novel that I found highly unbelievable. For example, on page 17, chapter 3, I do not know how Vita manages to find the antagonist of the novel because New York is freaking huge, how can she just randomly find him through a ‘car ride?’ and trust me there are more unbelievable instances such as the ending. [Spoiler] How can all of them make it out in one piece, unscratched?

Lastly, topics like racism are touched on in this novel but not really explored which disappointed me because this could be the very first children novel that includes important topics such as racism in but it will, unfortunately, be marked as a missed opportunity as the outcome of the novel did not explore it much.

In conclusion, I am proffering this novel 75% (A-) as I enjoyed it immensely although it has certain flaws and thus, the rating.

⇛ This book is currently available at all good bookstores. Do give it a try!

This is the end of my spoiler-free review for The Good Thieves By Katherine Rundell! I hope you all enjoyed it and follow me with your email/Wordpress account to get notifications when I post a new article! Bye!

3 thoughts on “The Good Thieves By Katherine Rundell | Book Review”