Hey Guys! It is Max here and I will be executing a book review from a novel called ‘The Statistical Probability Of Love At First Sight‘ By Jennifer E. Smith today. If you cannot recognise or do not associate with who Jennifer E. Smith is, she is the author of the book called ‘This Is What Happy Looks Like‘ which I utterly despised (but that’s not what we are going to discuss on today).

The Statistical Probability Of Love At First Sight is a Young Adult, Contemporary romance novel following a teenager named Hadley who missed her flight to London by 4 minutes and how four minutes would change her life forever.

So, without further ado, let us get into the book review for The Statistical Probability Of Love At First Sight! 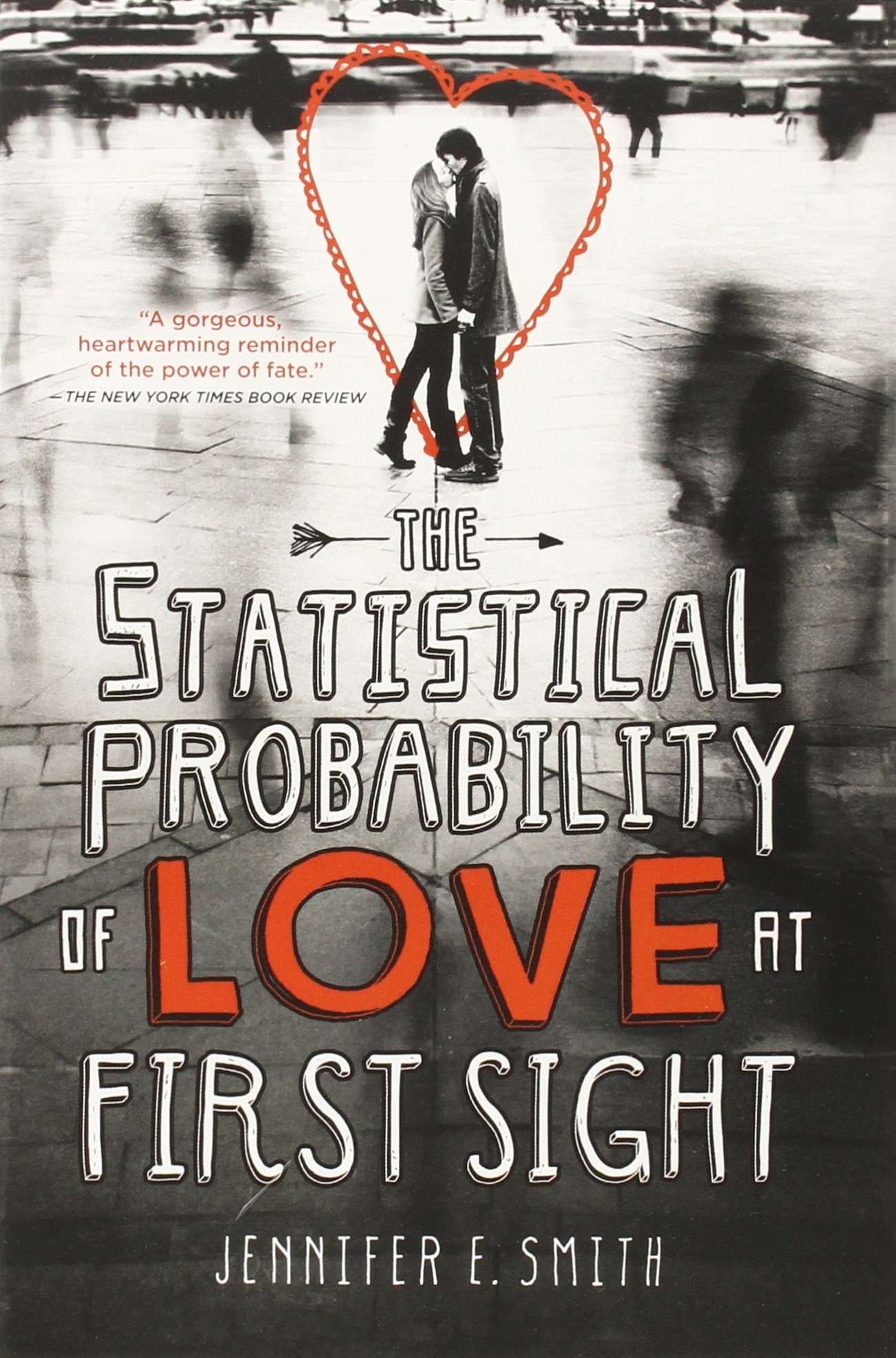 “It’s one thing to run away when someone’s chasing you. It’s entirely another to be running all alone.”- The Statistical Probability Of Love At First Sight, Jennifer E. Smith.

Who would have guessed that four minutes could change everything?

Today should be one of the worst days of seventeen-year-old Hadley Sullivan’s life. Having missed her flight, she’s stuck at JFK airport and late to her father’s second wedding, which is taking place in London and involves a soon-to-be stepmother, Hadley’s never even met. Then she meets the perfect boy in the airport’s cramped waiting area. His name is Oliver, he’s British, and he’s sitting in her row.

A long night on the plane passes in the blink of an eye, and Hadley and Oliver lose track of each other in the airport chaos upon arrival. Can fate intervene to bring them together once more?

Quirks of timing play out in this romantic and cinematic novel about family connections, second chances, and first loves. Set over a twenty-four-hour-period, Hadley and Oliver’s story will make you believe that true love finds you when you’re least expecting it.

Furthermore, the pacing of the novel was expeditious and by that, I mean remarkably agile. I finished this novel in two days due to the short length of the novel and this novel only contains about 270+ pages which allows people who are busy with life to read this novel in two sittings and to furnish an estimation on the time consumption that this book will take: *counting* 6 to 7 hours long. Thus, I highly recommend you to give this novel a shot if you are into Young Adult Contemporary Romance novel and if you do not really have the time to read, do give this book a blast because it will only take up a quarter of your day.

To those who are asking if there are any plot holes in this story, well I will just let you know that some elements were unanswered in this novel and that’s actually fine by me because some matters are better left unquestioned than acknowledged due to the fact that if the questions were elucidated, the story would not flow as well. Thus, there are plot holes but do not be wavered away by it because this novel is actually really good.

Now, I will converse on my absolute favourite quotes from this novel and they are:

“And see those clouds?’
‘Hard to miss’
‘Those are cumulus clouds. Did you know that?’
‘I’m sure I should.’
They’re the best ones.’
‘How come?’
Because they look the way clouds are supposed to look, the way you draw them when you’re a kid. Which is nice, you know? …” – The Statistical Probability Of Love At First Sight, Jennifer E. Smith.

“People talk about books being an escape, but here on the tube, this one feels more like a lifeline…The motion of the train makes her head rattle, but her eyes lock on the words the way a figure skater might choose a focal point as she spins, and just like that, she’s grounded again.”- The Statistical Probability Of Love At First Sight, Jennifer E. Smith.

Moreover, we will now discuss on the beginning, the hook sentence and the ending of the novel. The beginning of the novel was entertaining because she missed her flight by four minutes and Hadley, the main character, started to converse on how four minutes could shape her whole life. The hook sentence for this novel really did hook me in as Hadley kept going on about how time just blundered past your fingers and you could not clutch it back to its primitive state. The ending was really cute as the two main characters’ lives intersected together and they finally, fell in love with that passionate dance near Hadley’s father wedding church. Therefore, with all the boxes that were checked, I loved everything that this book had offered for its readers.

Now, let us sink our teeth into the writing section of this review!

Writing: Middle Section Of The Review

The style of writing for this book was articulate, crisp and not discursive. The reason for it not being discursive was because of every piece of information that was presented in this novel, was very significant to the plotline and notably relevant to each of the characters’ lives. Furthermore, the writing style was articulate and crisp due to the fact that it was easy to grasp on whatever the author was trying to converse with you through the story and how it was not really hard to picture each of the scenes in the book which I will talk more about it in following paragraphs.

We will now discuss on the overall flow of the story. The story flowed placidly as if the butter had been affixed on the story to make it sail so sleekly and you will discern that it rippled so evenly that it will just get you to recommence reading it until the very end of the novel which will make you go like this: ‘I NEED MORE OF THIS WRITING IN MY LIFE’ and therefore, I savoured the flow of the story in this extraordinary novel.

Finally, before we get into the characters’ section of this review, we will now speak on something called the ‘tone’ of the novel. The tone was amusing and ardent. It was amusing because it had some funny aspects and a lighter tone to it. On the other hand, it is also ardent because of the warmness of the relationship between the mother and Hadley herself. Therefore, I enjoyed the tone of the novel and I am wishing for more of Jennifer’s tones in her other written works which I will get to soon!

Character: 4/5 Section Of The Review

Hadley: I thought she was a remarkably well-organized and conceited character. She was a realistic portrayal of how hatred has furnished the best of us and no matter what the other person that had damaged you in the past tries to repent their mistakes to you, your eyes will still deem them as the enemy. I thought her emotions were really well-written as you can clearly see that she is upset or she is having mixed emotions. Also, her character growth was spectacular as her past was exceptionally well described and Hadley is just a character that is so flawed which proffers everything ten times more pragmatic! Thus, I relished on Hadley being a character in this novel.

Oliver: He had a quirky personality and his attraction to Hadley like two magnets with different poles which caused a magnetic field gave me a warm heart. In other words, I shipped them so damn obdurate together. As you recapitulate reading the novel, you will discover about his family lives and his past which were all very interesting because this novel kind of provides us with a glimpse of how wholly disgusting a person could be if he covets to perform such act. Therefore, I enjoyed his characterization in this novel.

Hadley’s Dad: He was sort of the antagonist of the story. It was not that he was any genus of immoral, he was just a character that will agitate your essence of being due to the inadequate matters that he had done. For example, he cheated on his wife, he broke their natures and sent them scurrying and mopping around the absence of his being. However, he had a character development at the end where he finally confronted on the reasons that he left them and admitted that he did harm. Thus, he was a character who you will initially hate but will come to accept it afterwards.

Hadley’s Mother: – actually, let me rephrase that. Even though she was not the centre of the story and she did not journey on the quest with Hadley to the wedding, it was still refreshing to heed glimpses of her character in Hadley’s reminiscence. She was the character who was hurt deeply like a knife stabbed five thousand times into her chest due to the departure of her husband but somehow, she managed to step up to the game and change the rules. For example, she looked past the sadness in her gist and converged on the future and thus, it deemed her as a character who was bold.

I would give this novel a 95% rating. It definitely was an interesting and light-hearted read and if you have read it or you are planning to read this gorgeous novel, do let me know (please)! I would really like to discuss the things that had transpired in this novel with you all!

This is the end of my spoiler-free review for The Statistical Probability Of Love At First Sight! I hope you all enjoyed it and follow me with your email/Wordpress account to get notifications when I post a new article! Bye!

7 thoughts on “The Statistical Probability Of Love At First Sight By Jennifer E. Smith || Book Review”