Hey Guys! It’s Max here and it had almost been a month since I last posted a book review and I am truly sorry for all the waiting that all of you had been enduring. But today, I am finally posting a book review and the book that I will be reviewing is called Viral Spark by Martin Mcconnell.

Viral Spark is a Young Adult, Futuristic Science Fiction following Robert- our male protagonist of the story as he tries to fix all the glitches that are destroying the community.

So, without further ado, let us get into the book review for Viral Spark! 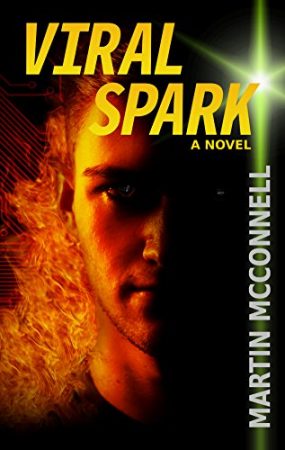 “Robots get to see the worst of the human condition on a daily basis. Good thing they don’t have feelings.”- Viral Spark, Martin Mcconnell.

The world has become a place of comfort, where a shopping trip means heading to the first floor to collect new food tubes for the printer. Menial tasks, like cleaning up or cooking, are relegated to robots, and Robert’s job while finishing school is to maintain them. With only three classes remaining, he’s hoping for something better.

Then everything starts to glitch:
the robots, the building, and even the people.

What starts as glitchy videos, misbehaving touch-screens, and random fighting, grows into a race against time to fix the problem before it escalates. Maybe he can land a cushy programming job in the process, but this virus is more than it appears…

Let us begin with this review by speaking on the pacing that this book had contained itself in. As much as I would like to say that the pacing was great, it was not because I found it to be extremely slow and it took a long time for me to finish. In addition, the pacing was not very consistent as it was like the waves in the ocean or rather- the graph of a transverse wave, going up and down all the time without ever being straight or flat. Furthermore, the pacing had caused a lot of flaws and it definitely did jumble up the story a little. Thus, I did not like the pacing of this book.

Moving on, we have the action-filled thingamajig that I would like to speak on in this review. The actions, which were almost non-existent until the last 15% of the novel, were not as exciting as I would like it to be and it did not make my heart pumped three times harder whatsoever. Plus, there were supposed to be a few scenes which would cause an emotional rollercoaster for me, as the reader but it kind of… sort of… Well, let me rephrase it: It did not work out well for me. Enough said, let’s move on.

Coming to the subject regarding plot holes, this novel was filled with a lot of holes that were tied along with the world-building. The holes came mainly from the idea of how humans meddled among the robots and who actually created the virus in the first place because there was a paragraph in the book talking about the source of the virus came from the ‘outside’ and that led to another hole in the plot, what outside and what location? In addition, there was a death in the novel that does not make any sense because I really do not understand why he killed himself and if the character that committed suicide predicted that the robots will ‘come alive’, why did he place the chips in the human brains in the first place? There are a lot more minor plot holes in the novel but I will just go through the ones that really bothered me when I was reading this novel and those holes that I had discussed are the major ones. Therefore, I did not enjoy the plot holes in this novel.

Diving deeper into the review, I have an issue with the atmosphere of the novel. Normally, the atmosphere of a science fiction novel should be heart-jerkingly scary because of its robots/aliens that are contained in it but this book does not give me the vibe of scary robots although some scenes in the book that had featured haywire robots attacking people and people turning on people were supposed to make me feel… scared but it does not. However, I liked the sense of pressure in the environment around the protagonist as he searched for a solution for the glitching people and robots. Thus, I liked but did not love the atmosphere.

Into the bargain, we have come to a point where I would like to have a chat on the predictability of the novel. The novel was not predictable and it had some shocking factors in it which I enjoyed. This point saved the novel for me as it gave me a little twist in my mind and it made me think for all I can. Thus, I loved how unpredictable this novel was!

Furthermore, we have the tone of the novel which I would love to speak on. The tone was surprisingly good because normally, if the atmosphere had gone bad, the tone would not be that great either but this novel had lit a different candle. The tone was enthusiastic, lively and vibrant. I really enjoyed how the author had instilled this factor into the novel! Thus, my enjoyment of this novel had been saved yet again by this favourable factor.

Finally, I would like to voice up on the relationship factor of this review. The relationships between the characters were not my favourite factor for this novel. None of them connected in a certain level and the protagonist had a love interest which I could not get more annoyed about because they do not have that kind of spark that would light up the chemistry between them and it felt forced… As if gravity wants them to be bonded together forever and ever. Thus, I did not like the relationship factor for this novel.

Now, let us get into the writing section of this review!

Writing: Middle section of this review

Unlike other readers who had problems with the style of writing for this book, I loved the writing style for this novel because it was unique and beautiful in its own way. Just by saying that, let us dive deep into why I thought it was a great way of writing.

First and foremost, I thought the writing style was articulate, clean and epigrammatic. It was epigrammatic because it gave a clear picture of what the protagonist had in mind. Furthermore, the writing style was clean because there was not any talk about sex and finally, it was articulate because the information came easily and readers would know what is going on as easy as ABC.

Finally, the descriptions of some landscapes were really clear and the pictures formed easily in my brain and with that element that was instilled in the novel, I thought it would give readers a better understanding of the world (even though the world-building was lacking) and also a greater variation for the readers to imagine the extremities of the world. Thus, I enjoyed the descriptions that it sometimes had in the novel.

However, speaking on the topic of ‘sometimes’, I thought the writing style for this novel was not very consistent as the landscapes were sometimes described and often times not described. In addition, the characters’ images such as their facial expression… well, to simplify that, their features were not described as much as I would have liked. Thus, I did not like the inconsistency in the novel.

Now, let us get into the character section of this review!

Characters: 4/5 section of this review

Robert: I did not feel the connection that I should have had with him. In other novels, I often felt the connection with the protagonist but unfortunately, this protagonist in the story does not provide that. He was enthusiastic and smart but his character was also… boring. While I was reading the book, I just ‘watched’ him going through his daily routine day after day until my brain just snapped and I had to put the book down for a while. However, we have a thing in common. Both the character and I love Physics. That’s all. Next.

Amanda: Honestly, I knew she was going to be Robert’s love interest but I did not root for them to be together because the chemistry between them was not as genuine as it should be. However, I did like her as a character in the novel more than I liked Robert. Amanda was a sweet-heart and she always put others in mind before she had decided an action that she should take. Thus, I enjoyed this character in the story.

Paul: A character that I quite enjoyed but the scenes in the book that had him in them were limited. He was quirky and I liked the way that he had dealt with stubborn-Robert which I’ll not be talking about because of some spoilers. Other than his quirkiness, I had nothing else to say about his characterization. Next.

Tom: I did not like him. I, personally, found him to be annoying because he kept repeating the things that he had said and he was such a show-off. Thus, I did not enjoy his nature in the story.

My rating for this book would be 53%. I thought the book was not that bad nor was it amazing. It just fell somewhere in the middle and thus, the decision had been made and the rating had been formed.

This is the end of my spoiler-free review for Viral Spark By Martin Mcconnell! I hope you all enjoyed it and follow me with your email/Wordpress account to get notifications when I post a new article! Bye!