Hey Guys! It is Max here and I will be reviewing a book called ‘Dark Inside’ by Jeyn Roberts today. Jeyn Roberts is the author of many novels and one of her novel called ‘The Bodies We Wear’ intrigued and peaked my interest and I cannot wait to pick that novel up! But, that is a story for another day.

As for now, I am going to give you guys a little summary on what this book is actually about and of course, the genre of it as well. So, Dark Inside is a Young Adult, apocalyptic and a dystopian novel following four teenagers named Aries, Michael, Clementine and Mason as the world around them crumbled and the monsters which killed humans exposed themselves into the face of the earth.

Thus, let us get into the book review!

This is a spoiler-free review and all thoughts and opinions are on my own! 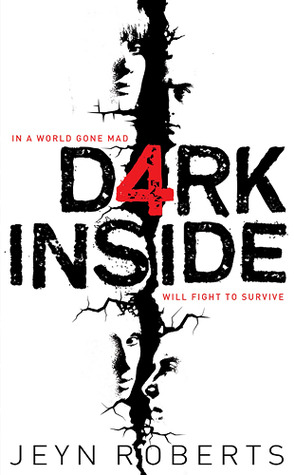 “The stranger smiled at her. “Humanity has found a cure to a disease they never new existed.”- Dark Inside, Jeyn Roberts.

Since the beginning of mankind, civilizations have fallen: the Romans, the Greeks, the Aztecs…and now us.

Huge earthquakes rock the world. Cities are destroyed. But something even more awful is happening: An ancient evil has been unleashed, and it’s turning everyday people into hunters, killers, and crazies. This is the world Mason, Aries, Clementine, and Michael are living in–or rather, trying to survive. Each is fleeing unspeakable horror, from murderous chaos to brutal natural disasters, and each is traveling the same road in a world gone mad.

Amid the throes of the apocalypse and clinging to love and meaning wherever it can be found, these four teens are on a journey into the heart of darkness–and to find each other and a place of safety.

Let us start off with the world-building and the atmosphere of this book. The atmosphere throughout this novel was crazily suspenseful. The constant pressure among the characters in the book filled the atmosphere with suspense- like I have said earlier, streams of tear-jerking tears and a spark of romantic vibes. All the atmosphere clung well together and that was what made the book great with all the mixed elements.

Moving on, let us talk about the pacing of the book. The pacing for this book was extremely quick with the constant action and the ongoing thoughts of the characters with their hopes and survival instincts to stay alive in a world that had gone mad. Although it was quick, it took me a couple of days to finish due to my school work and many other things that I had to accomplish during my days with this book. Thus, I was not able to finish it in 2 days.

Furthermore, there are quite a number of unexplained plots in this book and those unexplained plots led to plot holes. The plot holes started off with the gap between the time of the scenes the character were facing. For example, they were running from the monsters and out of the blue, ‘three weeks later’ appeared and nothing was really explained on how they managed to escape the monsters. Then, from that particular plot hole onwards, the same thing happened again near the end of the book. Therefore, I did not really enjoy this factor of the story.

Moreover, there is a quote that I really loved and I would like to share it with you guys, right here, right now, of course. Here’s the quote:

“There are different types of people in the world. There are people who accept what’s in front of them unquestioningly.

The live in the dark. In defeat. Ignoring what the future might bring or how they might help to make things happen.

Then there are people like me. Optimists. They too live in the dark, in times like these, but dream of the light.

I trust in the possibilities of betterness. I believe there is more to life than this. I have to. There’s no other choices for me.”

Oh my gosh! This quote. Okay. Some characters did not have hope in the new world but this particular character named Chickadee stood up to me as a glowing star in this book. She was full of hope, full of happiness in the darkest time and it was not fair that she had to go through all those crappy things in the past. Thus, this quote will forever have a place in my heart!

As for the continuation of the review, I found the tone for this book to be very dark because there were a lot of killing and the author actually went to the length of describing the murder of a person including children as young as five years old. So, if you do not like those kind of things, I do not recommend you to pick this book up.

Now, let us move on to the writing section of the review!

“There are so many empty people walking around on this little planet. Lonely people. Angry people. Bitter. Forgotten.”- Dark Inside, Jeyn Roberts.

The writing style was crisp, articulate, flowery at times and mundane when it came to certain part of the story. It was crisp and articulate because it was easy to read and the story flowed smoothly along the trail.

Now, let us move on to the characters section!

Colin: He was the worse character in this book. He was a selfish little coward who does nothing to help up with his group of friends even if he voted to sacrifice himself to help them to get the food from the outside world. He was also a liar and an egocentric person who only thought for what is good for himself and not the others. Therefore, I disliked him and I will not care for this character.

Aries: I loved her. She was thoughtful of others and was careful enough not to provide conflict into her and others lives. Plus, she was a leader with all the best qualities and therefore, she was my favourite character in this book and as for her character development, I would say that it shot upwards like a seed to a plant.

Mason: The thing is, I did not really like Mason in the beginning. He was an alcoholic teenager with a mean personality that made him looked like a bully but as the story progressed forward, he started to realize that he was being an ass to everyone around him and when he opened up himself, it was the saddest and the most emotional scene in the book. Therefore, he had a great character development!

Michael: I loved him in the beginning. He was helpful, brave and careful at first but unfortunately the author destroyed his character (Why?) and made him a coward that could not believe that he betrayed his own group. However, that scene was what made his character shone again. He helped Clementine and began searching for his brother and that was where he learned his mistake. Therefore, I still enjoyed his character!

Clementine: She was in the middle of hilarious, smart and dumb. Everything she does make me laugh but sometimes it does not because she was going through a hard time and the action scenes between her and the crazies were not funny but scary. Therefore, I loved her character!

Daniel: I do not really know what to say about him because he comes and goes with absolutely no reason and he was hiding something. Something he knows but would not want to share and the author did not reveal what he was hiding from the crowd and the things he knew. Therefore, I have absolutely no idea what to talk about his character!

I am giving this book an 85% rating. I liked the book but it had its flaws and therefore, it did not make it up to the 90% list.

This is the end of my spoiler-free review for Dark Inside by Jeyn Roberts! I hope you all enjoyed it and follow me with your email/wordpress account to get notifications when I post a new article! Bye!

3 thoughts on “Dark Inside by Jeyn Roberts”